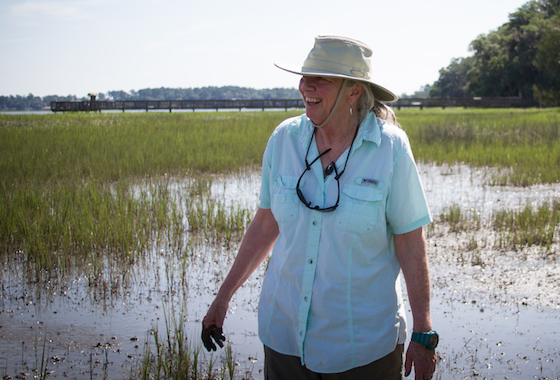 Mare Timmons, a long-time educator at the UGA Marine Education Center and Aquarium, retired at the end of August after 23 years of service to UGA Marine Extension and Georgia Sea Grant.

During her years as a marine educator, she provided marine science programming to thousands of Pre-K-college students, visitors and teachers. Her energetic approach to teaching others about the marine world has left lasting impressions on those who benefited from her institutional knowledge and expertise in marine science.

“Mare’s impact on marine education in the state and on a national level is immense,” says Anne Lindsay, associate director of marine education at Marine Extension and Georgia Sea Grant. “Her fearless, all-in teaching style, and laughter served as the heart of our work here for so many years. We are grateful for her investment in the Georgia coast and the world’s oceans.”

Timmons is best known for overseeing the Georgia Sea Grant marine education internship, a nationally recognized program designed for recent college graduates who spend a year on Skidaway Island gaining teaching experience in marine science and coastal ecology. Since 1999, more than 100 interns have participated in the program and many have gone on to professional careers in natural resource management, marine policy, classroom and environmental education, marine research, and animal husbandry.

“Mare was such a source of inspiration for me as a budding marine science educator. She always encouraged me to stretch the limits and reach my full potential while maintaining my professionalism and adventurous side,” says Jaclyn Miller, a 2011-12 intern, who is now a middle school science teacher in Williamsburg, Virginia.

In 2003, Timmons helped designate Skidaway Island as one of the sites in the NOAA Phytoplankton Monitoring Network. As part of this citizen science initiative, participants collect water samples from the Skidaway River every Thursday and analyze them for the presence of harmful algae that may create water quality issues for fish and other aquatic organisms. For 15 years, Timmons served as site supervisor, coordinating the volunteers who participate in the program.

Timmons focused on reaching new audiences through programming targeted towards underserved demographic groups in marine science. She launched the Women in Marine Science summer camp for girls 12 to 14. She also provided specialized programming for deaf and hard of hearing students at Hesse Elementary in Savannah for several years. She has been instrumental in bringing the work of Marine Extension and Georgia Sea Grant to the forefront of the national and international marine education community by sharing programmatic accomplishments and seeking out new collaborative opportunities at state, regional and national conferences.

Prior to her role at Marine Extension and Georgia Sea Grant, Timmons spent the early parts of her career on the west coast in California, serving as a teaching assistant and research instructor at California State University Long Beach. She also worked as a marine biologist instructor at the San Pedro Science Center in California.