Black gill is a parasitic infection affecting shrimp on the Georgia coast.

In 2013, Georgia shrimpers were catching far fewer shrimp, and many of those that were caught exhibited a strange darkening of the gills, a condition called black gill. Shrimpers contacted DNR, UGA Marine Extension and Georgia Sea Grant experts and coastal scientists for help in determining if black gill played a role in the decreased number of shrimp caught.

Although evidence supports that the increase in black gill contributed to the disappointing 2013 shrimping season, intense summer rainfall in the region was also a significant factor. Heavy rainfall disrupted the movement of post-larval shrimp returning to their estuary nursery grounds, which is important for development. The complex interaction between black gill transmission and other environmental factors, such as rainfall levels, complicates the research effort to determine the impacts of black gill on shrimp populations.

While black gill is clearly concerning to shrimpers, several other factors have been identified in the overall decline of shrimping on Georgia’s coast. The decrease in shrimp landings, while severe in 2013, is part of a long-term trend. In 2004, Georgia fisheries were worth a collective $10 million. By 2014, this value had dropped to $5.5 million. 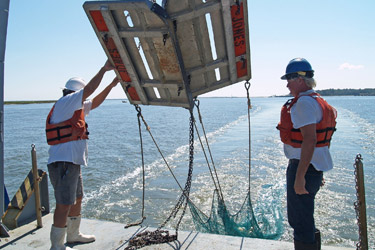 What are some of the factors in the decline?

Industry value has dropped primarily due to a reduction in the number of trawling licenses issued and trips by shrimpers. In 1979, there were 1,471 commercial trawling licenses in Georgia. By 2014, this number dropped to only 253. Other economic factors have also contributed to the reduction in trawling efforts in Georgia coastal waters, including aging vessels and fuel and labor costs. The average age of Georgia’s shrimp trawling fleet is over 50 years, requiring a great deal of maintenance to remain operational. However, the shrimping industry remains the most valuable commercial fishery in Georgia and provides a livelihood for many in Georgia’s coastal communities.

Black gill had been observed in Georgia shrimp before the 2013 season. Shrimpers have been seeing blackened gills for years with increasing frequency. Black gill was first detected by DNR off the coast of Cumberland Island in 1996, but there has been much variability in black gill prevalence since then.

From 2002 to 2014, the DNR reported annual black gill prevalence ranging from 6.8 percent in 2010 to 25.79 percent in 2014, with no clear trend emerging. The monthly infection rate varies greatly with first reports typically occurring in August, peaking in September and October and declining to near zero with colder water temperatures by December. The exact cause of the increase in black gill observations in recent years is complex and still not completely understood by scientists.

In 2016, UGA Marine Extension and Georgia Sea Grant awarded a second round of funding to the project team to further identify the causes, drivers and consequences of Black Gill to the Georgia shrimp fishery. The research objectives are to definitively identify the ciliate responsible for black gill, improve monitoring and relate any patterns to fishery performance. The project will facilitate the dissemination and use of this information to the benefit of a sustainable and healthy shrimp fishery in Georgia.

The list of cooperating academic units and agencies in this initiative includes:

Monitoring the Health and Abundance of Georgia’s Shrimp (GA DNR's Coastal Resources Division)
The Mystery of Black Gill: Shrimpers in the South Atlantic Face Off with a Cryptic Parasite (Current: The Journal of Marine Education)
Stay connected to the coast. Subscribe to our newsletter today!