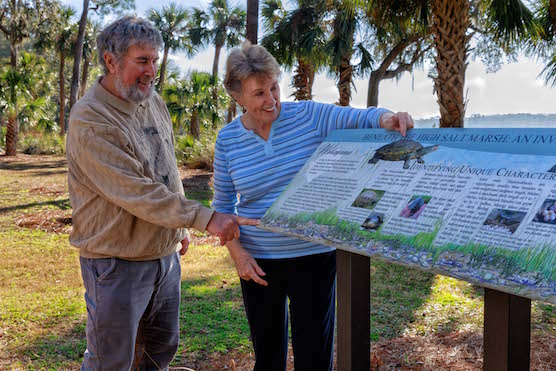 With help from UGA Marine Extension and Georgia Sea Grant, The Landings community on Skidaway Island was recently designated by Audubon International as the first Certified Sustainable Community in Georgia.

The decision to pursue certification was made in 2013 by members of Skidaway Audubon who established a Sustainable Skidaway steering committee made up of residents and staff in The Landings, as well as representatives from other entities on the island, including Skidaway Island State Park and UGA Marine Extension and Georgia Sea Grant. For the last five years, the committee has led the effort to become a Certified Sustainable Community.

Anne Lindsay, associate director of marine education at the UGA Marine Education Center and Aquarium on Skidaway Island serves on the committee and has been involved in a number of education and outreach projects that helped move the community forward in its designation.

“I joined the committee to establish a stronger connection with a team of like-minded and interesting folks who want to provide new opportunities for this island community,” says Lindsay. “The designation achieved by The Landings is a real inspiration to me, personally, and serves as a model for the greater Savannah area and broader coastal community.”

As a member of the committee, Lindsay helped create interpretive signs about historic and natural sites on Skidaway Island that have been installed in public areas in the community. These signs are designed to give residents a deeper understanding of where they live.

“Numerous people from UGA Marine Extension and Georgia Sea Grant have contributed time and expertise throughout the certification process,” says Meredith Welch, a Landings resident who serves as the program coordinator. “It was Anne who named us “Sustainable Skidaway,” which so aptly and appropriately includes our UGA neighbors on this island.”

The long-term sustainability plan approved by Audubon International has over 15 focus areas, including economic development, housing, environment, resource use, agriculture, education and open space, among many others. In order to receive certification, communities must implement projects in each of these areas that benefit community residents and visitors as well as the natural environment.

One of the long-term projects that earned The Landings points in the environment category is the Skidaway Island Diamondback Terrapin Hatchery Project, which is overseen by Marine Extension and Georgia Sea Grant Naturalist John “Crawfish” Crawford. Crawford holds a Department of Natural Resources Scientific Collection Permit, which allows volunteers in the community to retrieve terrapin nests from golf courses so they aren’t destroyed by predators or machinery. The eggs are transferred to nesting boxes that are located near the marsh, allowing hatchlings to be released into their natural habitat.

“John and I started this program 15 years ago, myself as a concerned spectator watching the terrapin nests being destroyed by the crows and raccoons, and John, who supported and guided my efforts to retrieve the terrapin eggs and release the newborn hatchlings,” says Carolyn McInerney, founder of the Diamondback Terrapin Hatchery Project. “In 2017, seven volunteers gathered over 2,400 eggs and released over 2,000 hatchlings. John’s expertise and guidance has been invaluable to the expansion and success of this program.”