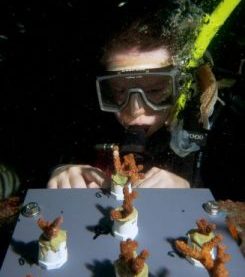 I can’t believe a year at Georgia Southern University (GSU) in Statesboro, Georgia has already flown by. I am a master’s student studying marine invertebrates in the most unlikely of places, rural Georgia. Thanks to funding from Georgia Sea Grant, I am able to pursue my graduate degree through a research assistantship. As a Sea Grant Research Fellow, I have had the opportunity to work with many invertebrates off the coast of Georgia from Gray’s Reef National Marine Sanctuary. These creatures are amazing and diverse; some may easily be passed off as rocks until you take a closer look at their intricate beauty. The water conditions at GRNMS are influenced by the Gulf Stream from the south and east, the Labrador Current from the north and by riverine discharge from the west. Because this is an area where tropical and temperate waters mix, GRNMS supports a wide range of animals. My advisor and biology professor at GSU, Daniel Gleason, wrote this grant in order to investigate the effects of ocean acidification on the invertebrate community at GRNMS.

Ocean acidification is the process by which carbon dioxide emissions from fossil fuels are absorbed by the ocean, gradually reducing the pH of seawater. Ocean acidification can be intimidating to explain, as it involves chemistry, physiology and ecology. However, it is essential for coastal communities to understand this concept. Ocean acidification occurs when carbon dioxide dissolves into the ocean and forms carbonic acid, thus decreasing the pH of the ocean from its normal level of 8.2. The pH scale ranges from 0-14; A pH of seven is neutral like water, two is acidic like lemon juice and twelve is basic like soap. In coastal waters, the pH can become as low as 7.8 in the summer. 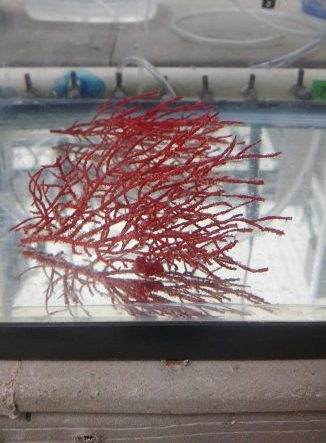 The changing of the pH in the ocean can be stressful for marine life. Marine organisms have little defense to chemical changes of the seawater surrounding their bodies, running over their gills and permeating their tissue. As humans, we can relate this to how we are affected by air pollution or overexposure to carbon dioxide in the air we are breathing. Benthic invertebrates, or those that live closest to the bottom of a body of water, are extremely important to the structure of reefs and creating shelter, cover and refuge for fish and crustaceans. It is important for us to understand how ocean acidification is currently impacting invertebrates, as it may drive ecosystem-level effects. This spring, I will be working with other researchers in the lab to investigate how non-calcifying invertebrates from the Georgia coast may be responding to lower pH conditions. The research team will be able to conduct laboratory experiments that artificially increase the pH of aquarium water by bubbling pure carbon dioxide into the seawater. We plan to measure their growth rates, respiration and other physiological parameters indicating stress level. These basic laboratory experiments will be used to understand how a change in pH affects these organisms. Information from species specific studies along with data on current conditions being experienced at the reef can be used by scientists and managers for future research needs and management actions.